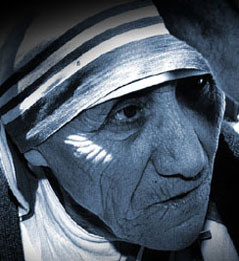 But we’re NOT Mother Theresa….

We’ve all heard it a million times – “It’s better to give than to receive”, and most women I know have bought into it – wholesale. I could be the poster child (or at least the poster middle-aged woman) for the cause. There is certainly nobility in giving, and I’d be the last person (since Mother Teresa is no longer with us) to stop giving on a daily basis. But – and here’s the catch – giving and never receiving can actually be a selfish act.

Selfish? To give and give till you’ve given all you think you have and then dredge up just a bit more? To finish your day exhausted and then nobly wave your weary hand dismissively at any morsel of succor offered? Yup, I stand by my claim – it can be selfish. Now far be it for me to call Mother Teresa selfish, but I think we can safely exclude her from the rest of this discussion and just focus on us mere mortals – we are NOT Mother Teresa.
So how, you may ask, is it possible to be a generous person and still be selfish? (And I’m not referring to hiding the last piece of Godiva Chocolate from your loved ones so you can savor it later – that’s not selfish, that’s just human!) I’m also not saying that everyone who gives is being selfish. This isn’t about giving because it makes you feel good, that’s part of why we give. What I’m referring to is having a highly developed capability to give while your ability to receive is withered like the potted plant you left on the porch in September and then forgot to water until last week (not that I would have any experience with such things). Follow me on this – the act of receiving is a gift to the giver. Let me repeat that:

The Act of Receiving is a Gift to the Giver.

Think of the joy you receive when you help someone. It can be a small act, like letting someone with a screaming child in front of you in the check out line (OK, poor example, that is an inherently selfish act). How about letting a car out into traffic in front of you, calling a friend who has been unwell, or picking out the perfect present for everyone on your Christmas list? Don’t you get the warm fuzzies just thinking about it?

It feels good to give.

By practicing the art of gracefully receiving such gifts yourself, you are allowing the giver to feel those same warm fuzzies. It is generous and kind and good to give, but it can be even more so to receive. Always doing things on your own feels noble, and powerful and exhausting, trust me, I know. But the art of gracefully accepting is also noble, and powerful, and once you get used to it, far less exhausting.

Give it a try. Today, yes – this very day, when someone offers help, accept gracefully, then watch the smile on the face of your helper. You may just learn that receiving can be one of the greatest gift sof all.

Living what my heart knows is right, not what my ego thinks should be.

I recently posted on Twitter, “Today I will lead with what my heart knows is right, rather than with what my ego thinks should be.”. It’s a challenge I have faced for a very long time, and for most of that time, I was blissfully unaware that I even had a challenge.

One of the challenges I’m facing, now that I’m facing the original challenge of being relatively unaware, is to be aware humbly. It’s sadly rather easy for me to feel somewhat superior for being good (like a karmic version of being a good driver and feeling far superior to those who don’t yield, merge, stop or generally drive as they should….. Not that I have ever felt that way……)

One of the points of becoming conscious in the spiritual sense is to become more at one with the universe and all of it’s occupants. I recently completed a personality profile for an amazing program I’m involved in and one of the questions asked if I felt connected to all human beings, animals and nature.  Despite my complete love of animals and my physical and spiritual need to spend a great deal of my life outdoors; I had to answer No. Although I consider myself a people person, feeling connected to all humans is something with which I struggle. Given the choice of spending time with humans or animals, I would normally choose animals. Given the choice of being by myself or in a crowd, I’d normally choose solitude. That being said, I love my friends deeply and have the ability to strike up casual conversation with complete strangers in supermarket lines. I genuinely enjoy human interaction – but I still feel myself an island – and all too often, a somewhat superior island to much of the human flotsam and jetsam I see in our universal sea. For someone who has very little self-confidence, it amazes me how many times a day I manage to feel superior to my fellow human beings.

The earlier reference to drivers was not a random choice. I am constantly amazed by the ineptness, dangerous practices and general rudeness of other drivers. Before my personal campaign to become more spiritually evolved, life was more simple – I simply engaged in road rage. I would rant and rage, simmer and swear; all of this vitriol directed at the offending driver, yet affecting only me.

My new approach to such drivers is to try to understand that they may be coming from a more difficult place than I and bless them on their way (admittedly, this usually comes after a dose of annoyance – this is a work in progress).

The challenge with all of this is that as I bless them on their way, I do so with a feeling of moral and tactical superiority, and I drive off extra vigilant to the traffic code. The point of my spiritual evolution is become more connected with the universe, not to use my growth as an excuse to see myself rise on my own. This doesn’t mean I will choose to “sink” to the level of human behavior which so frustrates me – quite the opposite. My goal is to continue to rise in consciousness in such a way that it will also help elevate the awareness and growth of others. What I need to constantly remind myself is that connection (and indeed leadership) must come from a place of humility. I can best help others when I shed my feelings of superiority and realize that we are all divine beings…. Even the guy that nearly hit me by running the stop sign in the Wal Mart parking lot last night.